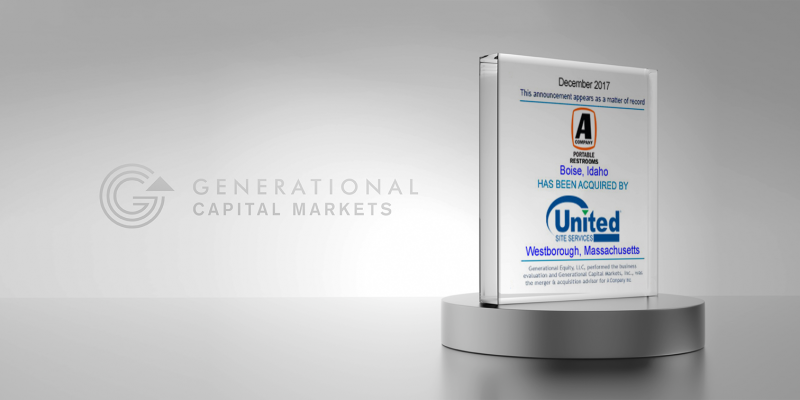 Generational Capital Markets, Inc., Member FINRA/SIPC and a leading mergers and acquisitions advisor for privately held businesses, is pleased to announce the acquisition of its client, A Company Inc., by United Site Services Inc. The transaction closed December 14, 2017.

Based in Boise, Idaho, A Company is a leading provider of portable sanitation services in the western United States. It offers dependable service at construction sites, public events, and other social gatherings with its suite of portable restrooms, hand washing stations, deluxe restroom trailers, temporary fencing and more.

A Company has six (06) branches with two each in Idaho and Arizona and one each in Utah and Nevada.

United Site Services, a Platinum Equity company based in Westborough, Massachusetts, is the nation's leader in the portable toilet and temporary fence rental services. It boasts the nation's largest fleet of portable sanitation equipment and has over 100 locations across the country.

"Because of A Company's leading position in key locations, our marketing efforts resulted in strong interest for the company," said Sanderson.

"Public and private companies, as well as private equity groups, participated in our process, with the client ultimately choosing United Site Services as the best fit."

Ron Carapezzi, CEO of United Site Services Inc., said, "This acquisition establishes USS as the market leader across the Mountain and Southwest Regions, while facilitating our entry into a new and highly attractive Boise, Idaho marketplace."

It has also been recognized for the 2016 M&A Deal of the Year for the acquisition of Pro Trans Logistics Inc. by Action Resources.

Honored to be named a 4-time winner of Investment Banking Firm of the Year.