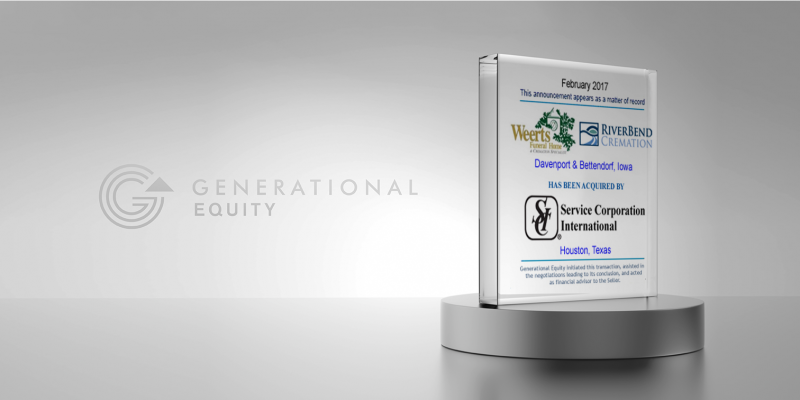 Weerts Funeral Home was founded in 1909 and had been acquired from the Weerts family in 2005 by David Deuth. In 2012, Mr. Deuth added the services of Riverbend Cremation and Quad-Cities Pet Cremation companies, both in Bettendorf, IA. All 12 employees are expected to remain with the company.

Mr. Deuth, who was diagnosed with cancer in 2016 has been retained in a consultative role by Service Corporation International (SCI).

"[My wife] Linda and I have decided and agreed that the restoration of my health must be my singular focus and my number one priority," said Mr. Deuth.

SCI welcomed Weerts Funeral Home and its cremation services companies to SCI. "We are very excited to have the Weerts' high standards, tradition and team join our company, and we look forward to their continued success in the Quad Cities," said Bill O'Brien, SCI's managing director.

"When you have a buyer who listens, like the acquisition team at SCI did, our client, Mr. Deuth, and his loyal staff's concerns were addressed effectively and quickly," said Mr. McGreevy.

"We were fortunate to have been on our client's deal team during such an important time in his life, and he remains in our prayers for a speedy recovery."

Generational Equity, part of the Generational Group headquartered in Dallas with over 200 professionals located throughout North America, helps business owners release the wealth of their business by providing merger, acquisition and strategic growth advisory services.

For more, visit www.genequityco.com and the Generational Equity press room.